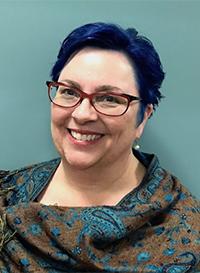 Ph.D. in art history, The University of Texas at Austin

The decoration of medieval illuminated manuscript prayer books often reflects complex relationships between storytelling, devotional practice, and page design, and can be linked to the larger visual and material contexts in which the books were intended to be used. My research explores these relationships in 13th and 14th century books made for English patrons, particularly in the household and social orbit of Isabella of France, a 14th-century queen of England. These books incorporate lengthy visual narratives in a variety of formats, and include some of the most celebrated examples of English illumination, such as the Queen Mary Psalter (London), the Isabella Psalter (Munich), and the Tickhill Psalter (New York).

My courses primarily address the art and architecture of Europe from the 6th through the 16th centuries. In addition to the broad survey from Paleolithic caves to contemporary media in our Introduction to Art History, I offer students a more focused exploration of illustrated books in Art of the Book and period surveys of medieval art and architecture and Renaissance art. Courses at the senior and graduate level explore various topics under general rubrics, including recent courses on visual narratives in pre-modern art; Romanesque pilgrimage art and architecture; Gothic manuscript Illumination; and theoretical approaches to northern Renaissance prints and paintings. Recent graduate seminars have addressed maps and diagrams in medieval art, symbol and illusion in northern Renaissance painting, the fragmentary and often revised survivals of pre-modern art and architecture, and other topics.