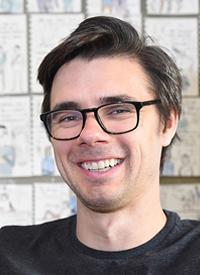 Nick Potter teaches courses in writing and theory for digital media. He is the author of New Animals, recipient of the 2014 Subito Press Prize for Innovative Prose. His writing and comics can be found in Ninth Letter, Black Warrior Review, Pank Magazine, Fourteen Hills, Caketrain, Bat City Review, and The Rumpus, among others. He has been a recipient of the John Hawkes Prize in Fiction, and recently received an honorable mention in Best American Essays 2015. He also serves as the comics editor for Anomalous Press. He has a BA in English Literature from the University of Utah, an MFA in Literary Arts from Brown University, and a PhD in English and Creative Writing from The University of Missouri.