Through an intricate series of silhouettes and patterns, Joseph Erb spotlights "Indigenous Brilliance" with his two-story digital illustration, which is rendered on copper panels at the entrance to the galleries.

"Indigenous people often don't get the credit for their contributions to the world; for example, the agricultural contributions and all the different foods that people utilize around the world that were ... cultivated by indigenous people over thousands of years," said Erb, an enrolled member of the Cherokee Nation who grew up south of Tahlequah in Blackgum.

"Sewer systems, star knowledge, all these are the kinds of things that indigenous people brought to the table," Erb said. "They were the early scientists of this land."

Artist Joseph Erb is an enrolled member of the Cherokee Nation and assistant professor at the University of Missouri School of Visual Studies.

Erb's "Indigenous Brilliance" references historical events like tribal removal, land runs and the Dust Bowl as well as Native contributions to the U.S. space program, the revival of bison herds and the reestablishment of tribal sovereignty.

"We're not victims; we are survivors. We actually have amazing cultures that withstand these traumas," said Erb, whose illustration has been licensed by the museum so it can be recreated on its merchandise. "This museum really shows what Natives want to celebrate in their culture and their communities. And that's a different experience that they're able to offer at the FAM: an indigenous perspective (that's) in every way trying to get people to understand and celebrate these wonderful cultures that make this area so unique." 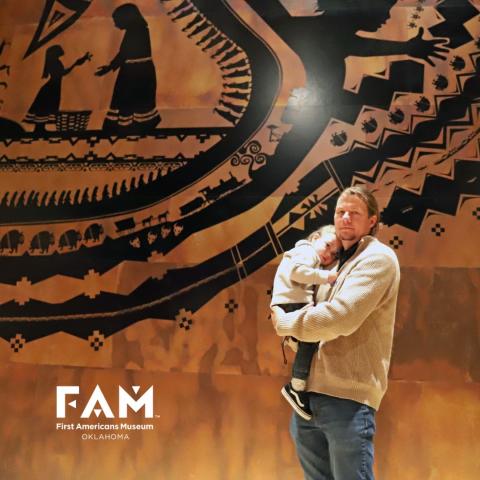