Guigen Zha was born in Nanjing, China, in 1970. Graduating from Changshu Institute of Technology in 1993, Zha worked as art teacher, animation artist, and graphic designer for many years in Shanghai and Shenzhen before continuing his formal education in the United States with a BFA from Missouri State University in Springfield in 2014. He is currently a MFA candidate in painting at the University of Missouri-Columbia.

Through a series of ironic and absurd imagery and an illusionistic spatial rearrangement, Guigen Zha’s current body of paintings, Illusion, intends to reveal the hidden crisis and contradictions behind the hallucination of a flourishing Chinese nation, providing a critique to the mentalities of ignorance and arrogance, and creating an opportunity for reflection. In Zha’s work, a puffy middle-aged and naked man (a self-portrait), as a symbol of contemporary Chinese, abruptly overlaps with the projected images of classical Chinese brush painting with imperial figures, interacting with the queen, musicians and court ladies. These ancient imperial scenes, mostly from Tang Dynasty (618-907CE), serve as a metaphor for the climax of a flourishing kingdom. However, even though the male figure occupies a dominant position in the paintings very much like the emperor in the palace, his posture, gesture and expression are often filled with helplessness and incompatibility, hence creating an illusionistic space filled with contrast and contradictions. The prosperity of the past dynasties cannot replace the brutal reality and the projected illusion of prosperity will eventually be shattered. Only when we learn from the nirvana of phoenix and rise from the ashes, can we regain our confidence, rejuvenate an ancient civilization, and rebuild a great country in the digital age. 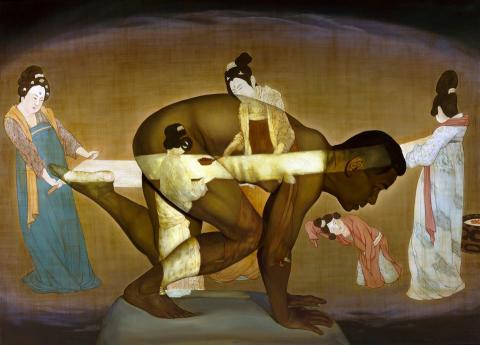