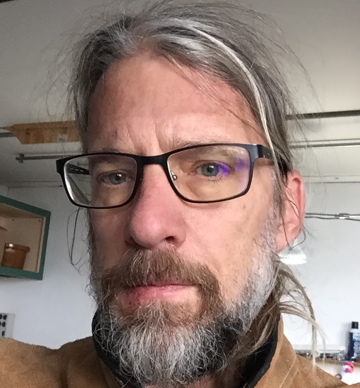 Chris Morrey was born on the Canadian plains in the late 1960’s and he has lived across the mid- and intermountain West in Alberta, Colorado, Illinois, Texas and Arizona, settling with his family in Columbia, Missouri, where he makes sculptures and public art commissions, works for the School of Visual Studies at the University of Missouri, and operates Dogwood, a studio space housing up to seven artists and mounting monthly exhibits of local art in Columbia's North Village Arts District. He earned his BFA from the Kansas City Art Institute in 1990, and his MFA from the University of Missouri in 2009. He has showed locally and nationally in Arizona, Oklahoma, Illinois, Texas, Tennessee and Indiana. He has public art installations in Tucson, AZ, Columbia’s City Hall, the University of Missouri’s Student Center, the Unitarian Universalist Church of Columbia, Boone County Hospital and the Broadway Hotel. He is working on a commission for the renovated Columbia Regional Airport to be completed in 2022.