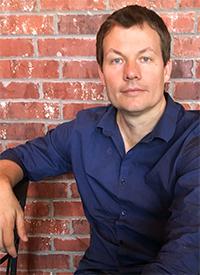 Joseph Erb is a digital media artist working in 2D and 3D animation as well as other materials, and he teaches courses in digital storytelling and animation. He holds an MFA from the University of Pennsylvania, and before coming to MU served as the Digital Media and Language Technology Specialist for the Cherokee Nation. He created the first computer-animated film and the first planetarium show in a Native American language, and has led major projects—working closely with technicians and executives at Apple and later Google, Facebook and Microsoft—to embed the Cherokee syllabary on the iPhone, iPad, and social media sites as well as Gmail and the search engine Google. He liases regularly with programmers, systems engineers and executives at these companies, as well as a wide range of other organizations including tribal nations, the National Park Service, and the Unicode Consortium.